Plans Unveiled for Phase II of the Memorial Project

They will include the construction of weathered steel walls inscribed with the names of some 1,500 police officers and staff who were killed whilst undertaking their lawful duties.

Plans have been unveiled for Phase II of the UK Police Memorial Project. The initial plans were approved by Trustees at their December meeting. They will include the construction of weathered steel walls inscribed with the names of some 1,500 police officers and staff who were killed whilst undertaking their lawful duties. Those such as WPC Yvonne Fletcher, PCs Nicola Hughes and Fiona Bone, PC Keith Palmer, PC Andrew Harper and Sgt Matt Ratana. 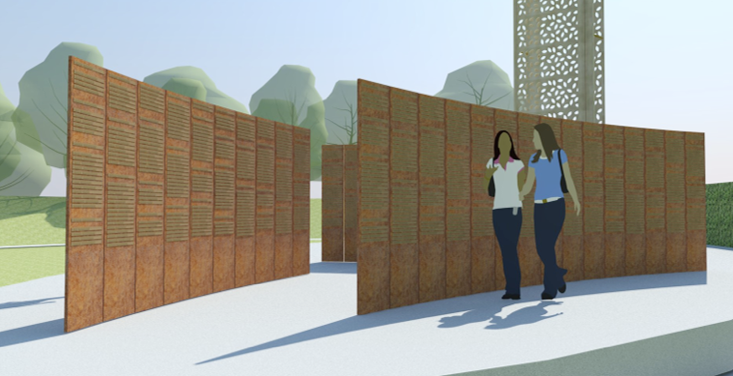 Artist’s impression of how the walls could look

The walls, curved in shape, will be made from ‘weathering steel’ with bronze individual plaques bearing the name and rank of the officer or member of staff killed and the year of their death. They will have space to honour the courage and sacrifice of those officers who sadly lose their lives in the future.

Phase II of the project will also see further work to develop the Digital Memorial that will extend the reach of the UK Police Memorial beyond those who just visit the site at the Arboretum. It will tell the personal stories of those behind the badge, with interviews from loved ones, friends and colleagues, personal family photographs and audio and visual material from news archives. The digital memorial will be developed in consultation with our partners from the Police Roll of Honour Trust and Staffordshire University.

A memorial for the modern age

This will be just one part of wider educational plans the Trust has for the memorial project, which seeks to contribute to an appreciation by all citizens of the role of policing in a civil society

An On this Day app will also be developed that give visitors to the Arboretum details about the officers and staff who died on the day of their visit.

The third and final part of Phase II is ongoing maintenance. With over 400,000 visitors a year to the Arboretum it will be essential that such an iconic edifice is maintained to the highest standard. The memory of the fallen, the service, the families and a grateful nation deserve no less.

Chair of Trustees, Martin Hewitt, said: “The UK Police Memorial at the Arboretum is a tribute to ALL from our Police service who have given their lives to policing. We are extremely grateful to everyone who has contributed to this project so far, but with further support from our donors, supporters and the wider public, we can finally finish this magnificent project.

“In that way, we can ensure that the courage, sacrifice and extraordinary heroism of those from the Service who stood in harms to keep us safe and protect us from harm is never ever forgotten.”

You can find out further details about Phase II of the memorial project and make a donation by visiting www.ukpolicememorial.org

21st December 2021
Back to news
About Chris Webb